She may have felt like a nobody who was invited to travel and work for a successful somebody… then invited to be a more important somebody in that family until things didn’t work out so well and she ran away, feeling again like a nobody… until she realized the One and only, true Somebody took notice of her and valued her enough to speak to her, comfort her, direct her, and provide for her.

Her name was Hagar.  She was the Egyptian servant to Sarah, Abraham’s wife.  When Sarah was unable to have children, she offered Hagar to Abraham as a second wife for the purpose of being a surrogate mother, through whom Sarah might have children (a common custom of their day).  When Hagar took too much pleasure in the success of her mission, Sarah treated her so harshly that Hagar ran away.  Pregnant and alone in the desert, her head and heart probably swirling with a whole gamut of emotions and questions, this nobody from a pagan land encountered the one true God.

“Hagar, where are you coming from and where are you going?”  He asked.  He spoke her name!  Almighty God knew her by name and invited her to tell Him her story!  She might have been surprised, but we don’t read that she was afraid.  She wasn’t defiant.  Hagar answered the Lord honestly, “I am fleeing from my mistress Sarai.”  I wonder if the years in Abraham’s household helped her to learn about God.  She might have been haughty toward Sarah, but she seemed humble before the Lord and comfortable enough to respond to Him.

God’s words were not easy for her to hear.  He directed her to return to that difficult situation and submit to her mistress.  But He also comforted her, reassuring her that He knew of her suffering, that she would have a son, and that He would multiply her offspring.  He even gave her rare insight into the kind of man her son would become.

Again, we don’t read that Hagar balked at the Lord’s direction to her.  She didn’t plead her case or argue that returning to Sarah might not be the best thing to do.  On the contrary, she seemed genuinely touched that God saw her, spoke to her and cared about her current and future well-being.  She said, “You are the God who sees me… truly here I have seen Him who looks after me.”

This nobody from a pagan land felt known, valued, and directed by almighty God.  We aren’t told all of Hagar’s thoughts, but we do know that she obeyed God.  She returned to Sarah and bore Abraham a son, Ishmael.

What a beautiful lesson in this little part of Hagar’s story!  She was not the first and would not be the last to find herself in a sticky situation, with complex human relationships!  God called her to do a hard thing – to submit to an authority who was mistreating her with unreasonable cruelty.  God called her to trust Him and obey Him anyway.  I want to believe it was her appreciation for God and His provision and care for her that enabled her to obey.  She was honoring Him first and He honored her by giving her the courage to do that hard thing.  We don’t read about Sarah treating her harshly after her return.  Could it be that Hagar’s humility and submission earned Sarah’s respect in return?  We don’t know for sure.  But I do believe this is a picture of a soft heart bringing about a much more positive outcome than a hard one.

In time, God fulfilled His promise to Abraham and Sarah, enabling Sarah to conceive their son Isaac.  For the first time in 13 years, there was unrest within their household again.  Conflict between the two half brothers stirred up old hard feelings from Sarah.  She demanded that Hagar and Ishmael be removed from the home where she would raise her own son.  Upon God’s confirmation and direction, Abraham made provisions for their journey and sent Hagar and Ishmael away.

This time, Hagar hadn’t run away in fear and uncertainty, she had been sent away – definitively.  Her own old hard feelings surfaced again, and those haunting voices that she was a nobody… still.  Once again, she was alone in the desert, in despair, with swirling emotions and questions – only this time she had a young son to consider as well.  Convinced that they would die of thirst, she left Ishmael in the little bit of shade she could find and separated from him because she couldn’t bear to see him suffer.

In that dark place, Hagar encountered God for the second time!  “What troubles you, Hagar?  Don’t be afraid.  I have heard your son’s voice.  Go to him and take him by the hand.  Raise him up for I will make him into a great nation.”  Again the one true God spoke her name!  Again He comforted her, directed her, and provided for her and her son by leading her to a spring of water.  God was not only with her, looking after her, but He was with her son!  God heard her son’s voice crying out to Him.  He heard her cries of desperation.  He saw her helpless situation.  And He had the answers.  The one true God was willing and able to meet her every need.  He had a plan for her life and He revealed what He knew she needed to confidently take the next step.

What confidence this gives us too!  It is so comforting to know that when we run out of resources, He is right there!  It is so wonderful that His provisions are perfect and not limited by events, conditions, or human relationships!

We may be different from Hagar in time and place, circumstances and even personality, yet the Lord sees each one of us and meets us exactly where we are.  He is the same God today!  He sees and knows us and will come close to us in whatever situation we find ourselves.  He calls us by name and reminds us that we are never alone and never out of options.  HE is always the best and only perfect option!

Hagar’s story reminds me of the chorus in David Osmond’s song, “He Hears Me:”

He hears me when I’m crying in the night

He hears me when my soul longs to fight

In God’s eyes, I am never a nobody.  I am not only invited to travel with and work for Him, I am welcomed into His family as His redeemed and adopted child.  I am given His Name!  He always sees me and hears me.  He will always look out for me and abundantly provide for me.  He will never send me away!  He will be faithful to preserve and complete His purposes for me.  The one true Somebody is my Father and because of that I never need to be alone or in despair!  Praise GOD! 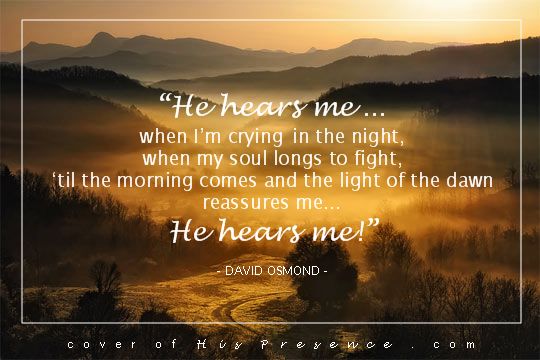