It was a gift with strings attached… literally!  For Christmas, we gave our 12-year-old son a free-standing basketball net for the driveway.  In addition to the luxury of shooting hoops right here at home instead of waiting for a ride to the park, the net needed to be assembled!  So as parents we thought this was a wonderful investment, to encourage a little father-son bonding over this construction project.  To our twelve-year-old, this was just “strings attached.”  But on the day set aside to build the basketball net, he joined his dad in the garage to tackle the enormous box of parts.

It didn’t take long in the sorting of those parts for our son to grow bored and impatient, looking my direction more than once and mouthing the words “help me!”  Being the consummate cheerleader, I just smiled wide, gave a hearty thumbs-up and carried on with my own chores.

When my husband went to look for a tool inside, our son sneaked around the corner of the garage to where I was clipping bushes in the yard.  He exhaled utter exasperation, “he wants me to “help him” but there’s nothing for me to do!  This is taking forever!!!  And I was hoping to go to a friend’s house to play video games today.”

“Bubba,” I said, “some things are more important than video games.  Your dad works long, hard days and you don’t often get this time to spend with him.  He’s been looking forward to working on this project with you.  Hang in there – it will be worth it!”

He didn’t look convinced, so I continued, “how do you think Dad even knows how to build that basketball net?  how to use those tools?”  He shrugged and kicked the dirt, “I dunno.”  “Those were Pop-Pop’s tools.  When he was your age, Dad spent Saturdays working with Pop-Pop on all sorts of projects.  He watched him work, he learned how to build things, how to fix things… and along the way they talked about life.  Dad learned a lot from Pop-Pop.  Stay with Dad.  Enjoy this time with him.  You might learn about more than just building a basketball net.”

Despite a second exhale of exasperation that instead of a rescue he got a mom-speech, our son went back to the garage and resumed his role as “assistant.”  As the hours went by (yes, it took hours!), I was thrilled to hear truly happy, positive chatter coming from the garage.  My boys were learning to work together!  My son (who can be easily intimidated by my 6-foot and sometimes intense husband) was learning how to talk to his dad.  He read the instructions, gathered the necessary parts and tools, anticipated the next move, and asked a lot of good questions.  He watched his dad closely and expressed concern and support when the job seemed more difficult than expected, “are you OK? ..  can you get it? … how did that happen?  … what should we do now?”  Every once in a while, he was invited to work the tools himself, to tighten a bolt here or measure a piece there, to make his own contribution to their building project.

I smiled as I watched my husband.  He honestly loves these projects – the chance to leave number-crunching and spreadsheets behind for a day to work with his hands, using those tools with so many precious memories of his own dad.  Sadly, he sometimes gets easily frustrated and almost disgusted, too.  But not that day.  He smiled!  He had a little more pep in his step.  It was JOY!  It brought joy to his heart to see his son interested and engaged, learning skills and knowledge he was so eager to pass on to him – just like his father did.

When it was all done, the two of them stood back to look at the new net standing tall and strong in the driveway.  Our son had forgotten all about the time and the delayed video game plans.  He let out a little surprised laugh, “I can’t believe we built that!”  With a playful jab of an elbow and a wink, my husband simply said, “I always tell you – watch & learn!  You’ll be amazed at what we can do!” 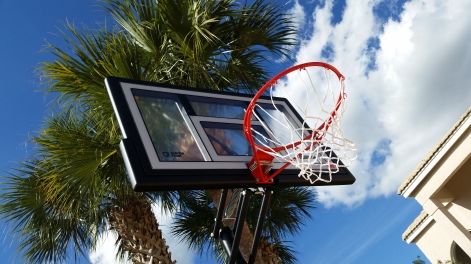 My mind made an instant connection to another father-son story we had been reading that week in the Old Testament – about Abraham & Isaac in Genesis 22.  Isaac may have been about 12 years old, maybe a little older.  His father needed his help with a very difficult assignment from God – to offer an unusual burnt sacrifice.  As they had likely done many times before, they gathered supplies, walked together to the site of the offering and maybe talked about more than just this sacrifice along the way.  Isaac asked good questions.  Hard questions.  And Abraham taught him lessons he had learned from his heavenly Father.  Abraham had grown to trust and unquestioningly obey the one true God.  He confidently told Isaac what he knew to be true ~ “God will provide a lamb for the burnt sacrifice.”

We can only guess that Isaac was learning to trust God as well.  When the excruciating part of the assignment came – to offer Isaac as the burnt sacrifice! – we do not read that Isaac resisted.  Instead, he followed his father’s example.  He trusted and obeyed God.  In His faithfulness, God provided a lamb for Abraham to sacrifice that day and spared Isaac, reiterating the covenant blessings to Abraham and to Isaac.  I wonder if that was the day when Isaac encountered the one true God in a deeply personal way for the very first time, not just from his father’s testimony.  He was learning to hold the tools of faith and trust in his own hands and work the bolts, wrestling through the hard parts.  In the end, he heard the covenant promises of Almighty God extended from Abraham to himself!  He may have looked back on that day and said in amazement, “I can’t believe we did that!”  And Abraham may have appropriately said, “watch and learn… WITH GOD all things are possible!”

The really cool thing is that this account of Abraham and Isaac is a beautiful picture of an even greater story unfolding ~ of God the Father and His own Son, Jesus.  It was at the age of 12 that scripture records that Jesus was “about the Father’s business.”  [Luke 2:49]  Even at a young age by most standards, Jesus was already committed to accomplishing the work His Father gave Him to do.  We read that He often went aside to a quiet place to talk with His Father, to learn from Him and to be guided and strengthened by Him.  He asked hard questions too: “if it be possible, let this cup pass from Me, nevertheless, not My will, but Yours be done.”  [Matthew 26:39, Luke 22:42]  When the excruciating part of His assignment came, Jesus did not resist.  This time, in His faithfulness to us, God did not spare His own son, but allowed Him to be our sacrifice!  In His faithfulness, God provided His Son as the Lamb to be offered in our place.  God’s eternal covenant promises are now extended to us!  Eternal life is our Savior’s extravagant gift to us – with NO STRINGS attached!!!

In that covenant relationship with God the Father, His Son Jesus now invites us to learn from Him everything that the Father has given Him, just as He taught His own disciples:

“Looking unto JESUS, the author and finisher of our faith,” [Hebrews 12:2], we can imagine His Spirit tenderly encouraging our hearts:

“Walk with Him.  Work by His side.  Learn from Him.  Watch what He’s doing and join Him.  When something doesn’t make sense or you’re not sure what to do, ask Him!  Everything the Father has given Him, He will share with you.  It brings joy to His heart to spend this time with you, to teach you, to see you so interested and engaged in the Father’s business.  There are jobs for you to do, too.  He wants you to hold His truth in your own hands and know its reality on a personal level as you see it work the nuts and bolts of life.  Watch and learn – you will be amazed by what He can do!”