Two women in desperate need of the Savior have the chance to cross paths with Him, God in the flesh, on the very same day.  They both need Him at exactly the same time, in different ways and in different locations.  Both probably feel it is “now or never” – if He can’t step in right now, it will be too late!  How does Jesus make the excruciating choice between two people in need? … [spoiler alert]  He doesn’t have to!  Take a peak with me into this amazing reminder of God’s limitless power in Mark chapter 5…

A dear bleeding woman has been suffering… for a long time!  She has been held captive by this disease’s hold on her natural body for 12 years, she is weary from exhausting every possible channel… and then… she has the chance to be within arm’s reach of the Savior, her Savior!  And He doesn’t let her down!  He is not satisfied with simply healing through her faith-filled touch of His garment.  He wants so much more for her.  He wants her to see Him face to face, to feel His touch, to look into His eyes, to hear Him call her “daughter” – and to know, really know that her faith in HIM has saved her and she can know peace and wholeness like she has never known.

Wow.  Just wow.  I am so thankful for this descriptive account that transports us to that busy street (not unlike our rushed life now).  The same Lord Jesus, who wasn’t satisfied with an impersonal dispatch of healing power, reaches to us individually and personally as well.  He who is the same yesterday, today and forever still cares enough to make time and commitments stand still long enough to make sure we see Him, feel His touch and hear His words claiming us as His own.  He offers His reassurance that our utter, unshakable confidence in Him is never displaced and will never let us down!

… and then there is Jairus’ daughter.  In desperation he finds Jesus, who agrees to go home with him to touch and heal his daughter.  It is on their way, and despite their singular-focused urgency, that this woman, sick as long as his daughter has been alive, reaches out in her own desperation to touch Jesus’ garment and is healed!  Jairus’ anxiety mounts as Jesus stops to meet her and interact with her in a meaningful and life-changing way.  In that moment, Jairus’ worst fears seem to come true.  It’s too late!  His daughter has just died!  He would never deny this poor woman her personal encounter with the Savior but the questions swirl and rage… did it have to be at the cost of his daughter?

When I read what Jesus said to him, I picture Him taking Jairus by the shoulders (both of them!), turning him to meet Jesus’ gaze, squarely and unavoidably, blocking out any other sight or sound… “don’t be afraid, just trust Me.”

Whoa.  I can only imagine that Jesus said those words with convincing authority!  Jairus’ head must have still been spinning, his heart pounding, but he responded with enough belief to lead Jesus home to his daughter.  His courageous faith enabled him to witness and live the impossible!!  The One who breathed life into his daughter the moment her life was conceived was the same One who breathed new life into her once more.  Jairus’ daughter opened her eyes, got up from her death bed and joined her jubilant parents in having something to eat!  Jairus experienced the reality that Jesus, our Savior, is never limited.  And with Him, it is never too late!

Christ’s provision for one person never cancels out His perfect plan for someone else.  This is our Savior… He is perfectly all-sufficient for each and every one of us!  He is never limited.  He is never too late.  We can trust Him!  He wants us to know … to really know that faith in HIM will save us and we can know peace and wholeness like we have never known. 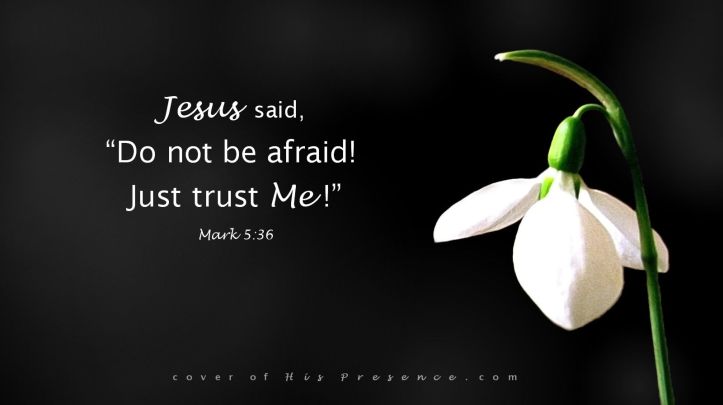